This study is on Rugby players but the benefits seem likely to cross over. Take some caffeine an hour before matches for improved technical and physical performance. I’ve recommended all the players to take a bodyweight appropriate dose of caffeine before games. The full abstract is here.

Caffeine enhances performance of single bouts of endurance exercise, but its effects on repeated bouts typical of those in high-intensity team sports are unclear.

To investigate effects of caffeine in a performance test simulating physical and skill demands of a rugby union game. 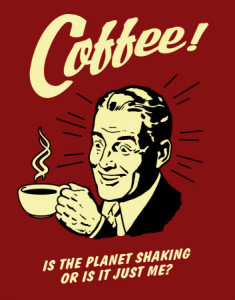 The study was a double-blind, randomized, crossover design in which nine competitive male rugby players ingested either caffeine (6 mg.kg(-1) body mass) or placebo (dextrose) 70 min before performing a rugby test. Each test consisted of seven circuits in each of two 40-min halves with a 10-min half-time rest. Each circuit included stations for measurement of sprint time (two straight-line and three agility sprints), power generation in two consecutive drives, and accuracy for passing balls rapi

dly. Interstitial fluid was sampled transdermally by electrosonophoresis before ingestion of caffeine or placebo and then before testing, at half-time, and immediately after testing; samples were assayed chromatographically for caffeine and epinephrine concentrations.

The effects of caffeine on mean performance (+/-90% confidence limits) over all 14 circuits were: sprint speeds, 0.5% (+/-1.7%) through 2.9% (+/-1.3%); first-drive power, 5.0% (+/-2.5%); second-drive power, -1.2% (+/-6.8%); and passing accuracy, 9.6% (+/-6.1%). The enhancements were mediated partly through a reduction of fatigue that developed throughout the test and partly by enhanced performance for some measures from the first circuit. Caffeine produced a 51% (+/-11%) increase in mean epinephrine concentration; correlations between individual changes in epinephrine concentration and changes in performance were mostly unclear, but there were some strong positive correlations with sprint speeds and a strong negative correlation with passing accuracy.