Physiology of small-sided games training in football: a systematic review. 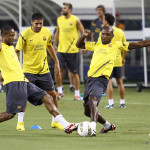 eas, often using modified rules and involving a smaller number of players than traditional football. These games are less structured than traditional?fitness?training methods but are very popular training drills for players of all ages and levels. At present, there is relatively little information regarding how SSGs can best be used to improve physical capacities and technical or tactical skills in footballers. However, many prescriptive variables controlled by the coach can influence the exercise intensity during SSGs. Coaches usually attempt to change the training stimulus in SSGs through altering the pitch area, player number, coach encouragement, training regimen (continuous vs interval training), rules and the use of goalkeepers. In general, it appears that SSG exercise intensity is increased with the concurrent reduction in player number and increase in relative pitch area per player. However, the inverse relationship between the number of players in each SSG and exercise intensity does not apply to the time-motion characteristics. Consistent coach encouragement can also increase training intensity, but most rule changes do not appear to strongly affect exercise intensity. The variation of exercise intensity measures are lower in smaller game formats (e.g. three vs three) and have acceptable reproducibility when the same game is repeated between different training sessions or within the same session. The variation in exercise intensity during SSGs can also be improved with consistent coach encouragement but it is still more variable than traditional generic training methods. Other studies have also shown that SSGs containing fewer players can exceed match intensity and elicit similar intensities to both long- and short-duration high-intensity interval running. It also appears that?fitness?and football-specific performance can be improved equally with SSG and generic training drills. Future research is required to examine the optimal periodization strategies of SSGs training for the long-term development of physiological capacity, technical skill and tactical proficiency.