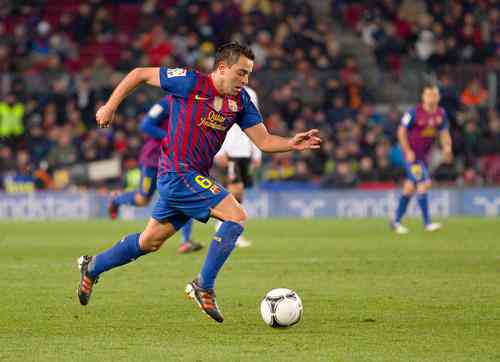 Repeat sprint ability (RSA) is one of the most important physical capacities in soccer. Although the following research study abstract examines RSA with cycling there are applications to others RSA sports that involve running like rugby and soccer. This study used repeated sprint bouts of 6 seconds and looked at performance decrements. From a metabolic perspective a 6 second effort is pretty close to a 45m sprint on grass starting from a standstill. That’s pretty long for soccer athletes and perhaps not super realistic to the RSA demands of the game (more like 20-30m would be more realistic and even then only for very short periods of a game). Nonetheless there are some important takeaways:
____________
J Strength Cond Res.?2011 Jul;25(7):1918-24. doi: 10.1519/JSC.0b013e3181e075a3.

Performance and fatigue during repeated sprints: what is the appropriate?sprint?dose?

When testing the?ability?of sportsmen to?repeat?maximal intensity efforts, or when designing specific training exercises to improve it, fatigue during repeated sprints is usually investigated through a number of sprints identical for all subjects, which induces a high intersubject variability in performance decrement in a typical heterogeneous group of athletes (e.g., team sport group, students, and research protocol volunteers). Our aim was to quantify the amplitude of the reduction in this variability when individualizing the?sprint?dose, that is, when requiring subjects to perform the number of sprints necessary to reach a target level of performance decrement. Fifteen healthy men performed 6-second sprints on a cycle ergometer with 24 seconds of rest until exhaustion or until 20 repetitions in case no failure occurred. Peak power output (PPO) was measured and a fatigue index (FI) computed. The variability in PPO decrement was compared between the 10th?sprint?and the?sprint?at which subject reached the target FI of 10%. Individual FI values after the 10th?sprint?were 14.6 ? 6.9 vs. 11.1 ? 1.2%, when individualizing the?sprint?dose, which corresponded to coefficients of interindividual variability of ?47.3 and ?10.8%, respectively. Individualizing the?sprint?dose substantially reduced intersubject variability in performance decrement, enabling a more standardized state of fatigue in repeated-sprints protocols designed to induce fatigue and test or train this specific repeated-sprint?ability?in a heterogeneous group of athletes. A direct feedback on the values of performance parameters is necessary between each?sprint?for the experimenter to set this individualized?sprint?dose.