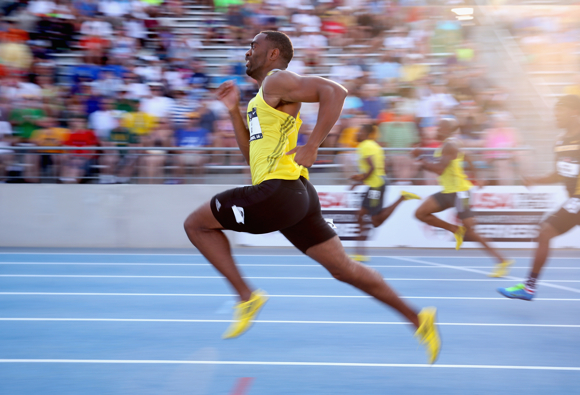 Sprint skills are becoming more important in soccer [3] and professional players have become faster.[4] Seeing as straight sprinting is the most frequent action prior to goals, both in scoring and assisting, an athlete should be able to effectively accelerate and progress to proper upright sprinting mechanics.[2]

There is much more to maximal velocity sprinting than being presented here, but these ideas are typically the cause of many other minute flaws that athletes and coaches alike, try to fix first.

When walking down the street, you can clearly spot the alpha-males – spine is upright, chest out, shoulders back, and head and eyes straight ahead. This should be no different while sprinting… yet it is. You don’t want to see a guy running around like a bobble-head doll, hunched over with their shoulders rounded, hyper-lordodic, or with arms flailing around. You would like to see neutrality from the ankle to the head.

The ability to stabilize your body while in flight or in single-support is extremely important to maintain limb stiffness (which can equate to more force into the ground) and to ultimately preserve speed.

“Ideally, a sprinter?s head, neck, and spine should be neutrally aligned and the athlete should display a slight posterior tilt of the pelvis. This posture ensures freedom of movement and facilitates relaxation, both of which enhance elastic energy return from the core and extremity musculature. An upright posture with a posteriorly rotated pelvis also promotes frontside mechanics and limits backside mechanics.” – M.Young [5]

This movement of lifting the knees up, or flexion of the hip, can also aid in producing more force into the ground. Mike explains this concept as a hammer nailing a nail flush into a piece of wood. If you take a short, choppy strike at the nail, the nail won’t be driven far into the wood because there is no room to accelerate the hammer toward the nail. Conversely, if you take a huge swing at the nail you could put the nail into the wood in one or two strikes because there is more room to accelerate the hammer.

This same concept can be applied to knee height in sprinting.?If your knee stays low, like a short, choppy hammer strike, there is minimal ground reaction force. A high knee has greater potential to increase ground contact force, thus increasing stride length and vertical propulsion.

Dorsiflexion of the foot (think toes up) places a greater pre-stretch on the achilles, gastroc, soleus, etc. Because this complex is under an active pre-stretch, they are capable of producing a greater concentric contraction due to the stretch shortening cycle – like a rubber-band that is fully cocked.

Loren Seagrave’s credit card rule (or at least I heard it from him first) can be a nice cue to maintain slight dorsiflexion until toe-off. As the the foot touches down directly under the hip, you should be able to slide a credit card under the heel. This can be a great visual representation of where the athlete’s limb and foot should be in relation to the ground. The reason for this is so the athlete does not get in the habit of toe-running and so there is no unwanted breaking forces that comes with heel-ground contact.