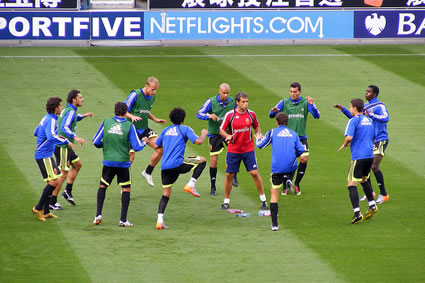 Vern Gambetta on Warmups for Soccer

Vern Gambetta is a long-time friend and professional mentor. His no-nonsense approach to athletic development has earned him respect in many sporting disciplines and coaching, consulting and education work around the world. Vern has been the Conditioning coach for Tampa Bay Mutiny, US Men?s World Cup team, New England Revolution and a consultant for the Chicago Fire, University of Virginia Women?s Soccer, University of North Carolina Women?s Soccer. Recently, Vern wrote the following on one of his blogs and I thought I’d share since it’s great advice and counter to what seems to be a growing trend of doing all fitness training with a ball.

I have written many times about the role of warm-up. Despite that I continue to be amazed at the lack of understanding about this crucial part of the training process. There is so much more to this than meets the eye on first glance. Last week I had a phone call from a colleague (One of the best in sport ? he has worked with some of the most high profile teams & individuals of our generation). His pre- soccer training warm-up was evaluated by a representative of a national federation (Best unnamed, it could be one of many) and it was rated poor and ineffective because it did NOT include the soccer ball! I almost dropped the phone ? how ridiculous. The purpose was to warm-up for soccer, not to play soccer to warm-up, a subtle but very important distinction.
This just underscores a huge problem in soccer (and a myriad of other sports). Soccer is plagued by injuries at all levels of play and varying degrees of severity. The trend is to do more with the ball including warm-up, the theory is that more touches will produce better players faster. Injuries have increased there is an epidemic of niggling groin, hamstring and calve strains that result in missed practices and matches. The solu