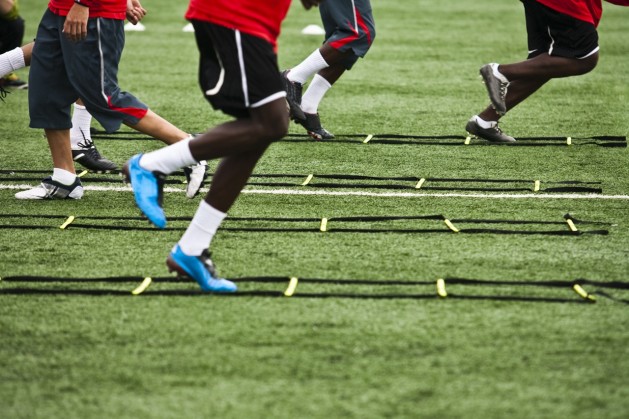 Q&A on physical prep for soccer

I was recently asked to share my thoughts on speed and power development for soccer players with a fellow fitness coach and give my thoughts on the training plan they had put together for one of their?athletes?who trains with me while they’re in?town at my training center – Athletic Lab.?They had a handful of specific questions….
A question for you ? what specific exercises would you prescribe for a player to work on the foot strike/propulsion phase?? Or is that you would more work on the gluts and hamstrings?? I would be interested in your thoughts.? Also do you do much ladder work.? Just from doing sessions with players where you focus on the high knee drive, then if players go through ladders the movements are short and sharp with no chance for any kind of knee lift!? So I would just be interested in your thoughts there.

?Just out of interest, why did you switch to 6 sets of 3 and what weight did she lift?? And do you mean that from standing position she went to the hang position and straight in to the movement rather than stopping?

?In terms of squats, I feel that when we go heavy for squats with the bar that some players experience lower back pain, which is why I was contemplating switching to a machine type squat.? I know technique partly, but also I just feel that when we are in camp and if backs become issues it affects all of the players training.? So again I would be interested in your thoughts there.? Would you switch to a machine so a player could lift a heavier weight?

Here’s my responses…
I don’t do a ton of weight room work specifically for foot strike / propulsion…..I tend to think of resistance training as being very general training that has some carry over but trying to get very specific in the weight room has limited application in my experience. That said, I think certain types of plyos where minimal amortization is emphasized can help. Also, building eccentric strength to a high level can be quite helpful to help take on that 2-3x bodyweight impact. That said, I do think the glutes and hamstrings are the most important muscles for top end sprint speed and I do emphasize them but not to the exclusion of more full lower extremity exercises that work all actions / muscles….especially the biarticular ones.
?
I tend not to use ladders for anything but warmups. I find there’s little application to really running fast. Running fast is really about putting as much force in to the ground as possible (with that force application being front loaded in the stance phase). Ladders actually teach athletes to ‘go through the motions’ of high knee lift (or sometimes short / choppy knee lift) without the accompanying force application. In fact the ladder can actually constrain the force application because if it were maximal they wouldn’t be able to stay in the confines of the ladder.
?
I’ve found similar on the back squat with some players. I think many soccer players tend to have limited mobility that gets exposed in full range heavier squats and in an attempt to hit the depths requested by uninformed strength coaches they compensate in the lower back. In this case, I think it’s safer to prescribe something else. I don’t think Athlete?XYZ?is in that group though although she does have very limited dorsiflexion on one side (I think it was R ankle but not positive). Yesterday we did high box step ups since we don’t have a hex bar (but have one on the way). I like the high box step ups because they don’t load the spine like a back squat, are unilateral so you can address symmetry, and allow for similar kinematics as a deep squat that even more restricted athletes tend to be able to do safely and with good technique. I also hadAthlete?XYZ?try power cleans from the floor which I like to incorporate with hang versions as well for those athletes who have some experience with the lifts. They provide a ‘squat like’ strength stimulus when pulling from the floor and engage the hamstrings and glutes in a way that hang variants of the lift do not.?Athlete?XYZ?hadn’t done them before but did well. We did 5 x 3 on power cleans from the floor.
?
I don’t mind machines at all. Because they can be restricting, I’m pretty picky on which I use and prescribe. Most leg press machines are garbage in my opinion and I rarely use single joint machines for athletes although their are occasions when I think it’s appropriate. I have used a leg press to allow athletes with bad backs to be able to load the lower extremity more than they’d otherwise be safe to do but in general I’ll look for unilateral (step-ups, single leg squats, etc) and quasi-unilateral (split squats, lunges variants) bodyweight and moderately loaded exercises as a better alternative.
?
I switched the hang cleans (and yesterday’s power cleans) to a lower rep scheme because I like to keep the olympic lifts to 5 or fewer reps so they can work on maximal power output / bar speed on each rep and do it with appropriate technique. Going with higher reps shifts the exercise to more meso-power / power-endurance work which I think has a place but is better developed with exercises that are not as technical (like jump squats, sled pushes, etc).
The following two tabs change content below.