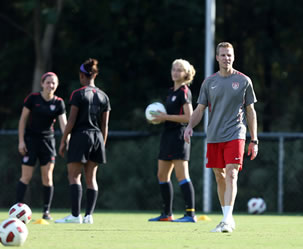 Periodization in Soccer Part 3: Do Coaches Know how to Periodize their Training Sessions to Fit Into Optimizing Individual and Team Goals? by Breanna Rohde

[Breanna Rohde is an Athletic Development Intern at my sports performance training center: Athletic Lab. This is the third?in?a series of blogs on the role of periodization in soccer. Breanna interviewed former Portland Timers Fitness Coach John Cone for assistance with this series.]

So far, we have discussed periodization in a soccer-specific community, the general principles and concepts in order to introduce periodization methods into training sessions and an entire season. With such a vast variety of variables that go into a soccer club, let alone a team, it is important to identify the target audience of who should gain the proper knowledge on the ins and outs of periodization.

I realize the most difficult part about periodization within a soccer-specific community at the youth level is how to actually implement the basic principles. By realizing this huge factor, I have come to the conclusion that there needs to be primary and secondary steps taken in order to accomplish the said benefits of periodization in a soccer session. The primary step is to target the people who are directly connected to the teams and players themselves, the coaches – the people most responsible for training a group of players to produce the best quality of work in the sport of soccer. While the actual soccer players are the ones who step out onto the field each day and put in the work (physically and mentally), they still need guidance. Where exactly does this relationship of a coach and their methods need to be evaluated in order to develop the athletes to the full potential?

Dr. John Cone claims that the biggest disconnect in periodizing the sport of soccer and its success rate is that the general awareness has increased, but its daily application is lacking (1). Another well-known figure in the soccer world when it comes to periodization is Raymond Verheijen. To go along with what Dr. Cone said, Verheijen claims that coaches, “often think they are soccer periodization experts after just one day of education? (2). This is far from reality. Education and application takes not only time, but trial and error.

Something to take note of at the youth level of coaching is that being a youth soccer coach is often not a full time job for the majority of coaches. Therefore, it makes education on such an in depth concept time consuming and tedious. Regardless of the uncontrollable factors, the coaches who understand and believe that periodization is a key component to what separates highly accomplished and successful soccer teams will put in the extra effort to put themselves at a higher chance of being placed in those categories.

Even if a group of coaches are not able to immerse themselves in every aspect of periodization, Dr. Cone has a few critical points that can get coaches to think about whether or not their sessions are optimizing their training sessions. The two most important factors are that coaches need to be cautious of balancing duration and intensity of each activity. According to Dr. Cone the two questions that should be asked of the coaches are (1):

How long do you think they (the players) can do that activity at game speed?

How long will it take them to recover and do it again at the same game speed?

By asking these questions, it gives the coaches something they can easily make sense of in order to evaluate the quality of their player?s performance and introducing them to periodizing their sessions without making things too complicated. Most coaches are not going to understand how to periodize their training sessions, but there are ways and methods to begin the transition of providing a quality periodized soccer session.
At every level and in every sport it is a coach’s job to be a part of the day in and day out process of training their athletes. They should ensure that they are using the training sessions to the fullest, especially as a youth soccer coach. It is even more important to get the most out of training sessions because teams typically only train as an entire unit bout 3 times per week (not including game days).

The bottom line is that awareness is the single most important initial step in the process of changing a culture when introducing the principles of periodization. The largest group of individuals involved who need to become aware are the coaches. In order for this primary step to be successful, coaches must make the conscious decision to dedicate time to educate themselves for their benefit and their athletes. Vern Gambetta, an elite level track & field sports performance coach and educator, provides all coaches with simple, yet powerful words of wisdom. On this point he advises all coaches to “invest in the process” (3).