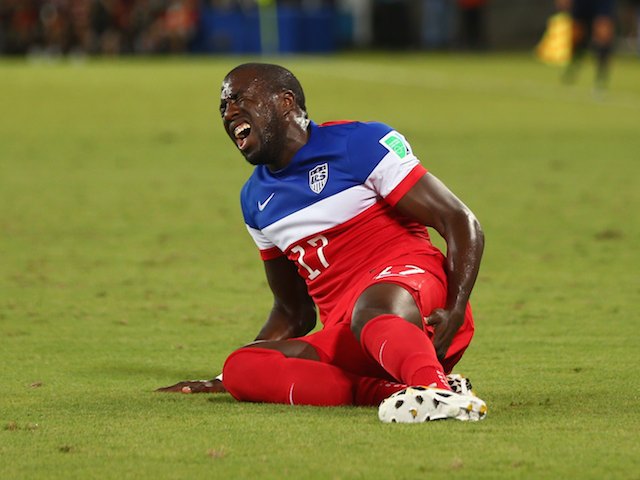 [Brian Guilmette?is an Athletic Development Intern at my sports performance training center: Athletic Lab. This will be the first of a series of blogs on hamstring injuries.]

He?s speeding across the field towards his opponent.? Weaving in and out of the other players on the field, he closes in on the enemy at over 8 meters per second. Ground reaction forces of several times his bodyweight resonate through his body like thunder with every stride.? His legs act as stiff springs to propel him forward, when suddenly his head whips back and he lets out a roaring scream.? Grabbing the back of his thigh, his body hurls forward and he rolls across the pitch. It?s as if a sniper, tucked away high up in the stands, has shot him down.? The crowd gasps as the trainer runs onto the pitch to assess the damage.? After a couple minutes of tests and palpations, the trainer helps him to his feet and becomes a human crutch as he limps on one leg to the sideline.? By halftime ESPN is reporting that he suffered a hamstring strain and will miss at least the next 17 days of play, leaving his teammates vulnerable as they head into the next few weeks of competitions.

Hamstring Injuries are one of the most common injuries in sports, particularly in those with a high rate of sprinting, jumping, and kicking.? Among the most injury-prone sports are English professional soccer, Australian football, English Rugby, and American football.? Yet, since sprinting is a commonality shared among all field and court sport athletes, it would not be out of line to say that hamstring injuries are a significant threat to any of these types of athletes, regardless of any jumping or kicking requirement.? But why are hamstring injuries so prevalent in these sports?? Is it a lack of strength, or poor sprint mechanics?? Or is it simply just a result of inadequate flexibility?? Whatever the cause, hamstring injuries are not going away, and what is even more alarming is the probability of re-injury once an athlete experiences an initial strain.? A re-injured hamstring can result in even longer recovery times than the first.? It is of critical value for coaches and athletes to understand the very nature of hamstring injuries and how they can be prevented.

In a nutshell, hamstring strains come in three forms, or degrees.? Grade I strains are classified as mild with very little tear and little or no loss in muscular strength.? Grade II strains are moderate with slightly more significant tearing and a noticeable loss in muscular strength. Grade I and II strains are the most often occurring strains in sports.? Grade III strains represent a severe strain with a complete tearing across the entire muscle, with a loss of function to the muscle.

The hamstrings consist of three polyarticular muscles (muscles that cross and act on more than one joint) called the biceps femoris, semitendinosus, and semimembranosus. All of these muscles originate at the ischium and insert below the knee on the lower leg. As a group, these muscles work in synergy to both extend the hip and flex the knee. However, individually, they each have slightly different responsibilities. Because the biceps femoris inserts laterally on the head of the fibula it also contributes to lateral rotation. Both the semitendinosus and semimembranosus attach medially to the tibia; therefore they contribute to medial rotation.

Immediately following foot strike, a peak knee flexion and peak hip extension moment occur, suggesting that the hamstring muscles are in concentric contraction (Liu et al, 2012) . However, prior research did not support the idea that the large forces following foot strike are necessary to cause hamstring strains.? Rather, research has shown that hamstring injuries largely occur during the late swing and late stance phases of the running cycle, when the hamstring is undergoing an eccentric contraction.

This list represents extremely generalized concepts on how to increase performance while subsequently decreasing the likelihood of injuries.? Further mastery of all four is critical for any serious coach or athlete.

Eccentric training as a means of reducing hamstring strains:

By now, it shouldn?t come as a surprise that because hamstring strains occur mostly during the late swing and late stance phases of running, while the muscle is eccentrically contracting, that eccentric strength plays a significant role in their prevention.

Stay tuned for part 2 of ?Sniped? ? The war on hamstring injuries, where I will discuss eccentric training in detail, as well as provide examples of exercises that can be used to increase eccentric strength, with the ultimate goal of reducing hamstring injuries in mind.

Coyle. ?Design of a soccer training session based upon the physiological match demands of competitive soccer?. 2000.