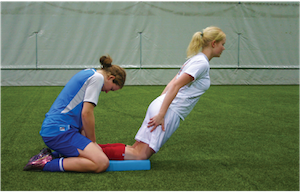 [Brian Guilmette is an Athletic Development Intern at my sports performance training center: Athletic Lab. This will be the second in a series of blogs on hamstring injuries.]

Previously on “Sniped” – The war on hamstring injuries:

Part one ended with a statement that eccentric strength plays a significant role in the prevention of hamstring strains.  This makes sense because the majority of hamstring strains occur in the late swing phase of the running cycle, when the hamstrings (particularly the long head of the biceps femoris) are experiencing peak musculotendon strain and force.  However, not all eccentric exercises are appropriate means of training.

What exactly is an eccentric contraction?

In the simplest of terms, there are three different types of muscle actions:

It is important to note that all dynamic muscle action is triphasic (Verkhoshanksy and Siff 2009).  In other words, all three of these muscle actions are present during dynamic movement; even if seemingly, in the case of isometric muscle action, absent at times.

This becomes an important consideration when training, because all three of these muscle actions are capable of producing different amounts of force.  For example, research has shown that athletes are capable of producing 20-60% more force eccentrically than concentrically.  Here in lies the problem.  When performing a 1-Rep Max (1RM) back squat, the weight on the bar is 100% of what you are able to lift concentrically.  You are significantly undercutting your eccentric force production potential by 20-60%. If eccentric strength is important in preventing hamstring injuries, how are you supposed to increase eccentric strength if you are only training with concentric based exercises?

Sometimes called “yielding exercises,” eccentric training uses eccentric contractions to produce more force, using less energy, than concentric contractions.  Though often negatively attributed to delayed onset muscle soreness (DOMS), there are several benefits to these exercises, including two notable ones to consider.  Yielding exercises have been shown to increase flexibility, and increase tendon strength.  This is noteworthy to the cause because, as discussed earlier, most hamstring strains occur when both the length and eccentric forces are peaking. If the functional length of the hamstrings can be increased, perhaps the potential for injury to occur can be decreased.

Supramaximal loading consists of exercises where loads above 100% of a concentric 1RM are used.  The application of loading this way varies depending on the athlete’s goals, but with regards to improving eccentric strength qualities, they are commonly used as “negatives.” An example would be a back squat with 120% of 1RM lowered to the safety bars in a power rack.  A good morning can be done the same way by un-racking the bar, and hinging at the waist until the bar stops on safety bars.  Another way of getting a similar effect would be holding a heavy medicine ball while lowering in a glute ham raise, and dropping it at the bottom.  “Weight releasers” are a piece of equipment that allows added weight to be hooked to the bar, only to be released once the athlete is in the bottom position, allowing a manageable concentric portion of the lift to be performed.  These types of eccentric overloading can be effective but it comes with a potential risk for injury, as well as a requirement for assistance in getting the barbell back up to the starting position.  If assistance is not available, it becomes even more time consuming because the athlete would have to unload the bar, re-rack it, and re-load it for every rep.

Not all eccentric work needs to be supramaximal.  Adding tempo to the exercise can accentuate the eccentric portion of a lift.  For example, submaximal loads can be used during a Romanian dead lift (RDL) with a three second count while lowering the weight.  This is more practical than supramaximal loading because the weight is submaximal therefore can be lifted concentrically with no problems, eliminating the issues noted above.  The downside to this work is if the loads used are submaximal relative to the athlete’s 1RM concentrically, it is even more submaximal relative to the 20-60% more that can be handled eccentrically. Brockett et al first detailed the Nordic hamstring exercise (NHE) in 2001 and its effectiveness of reducing hamstring injury occurrence has been studied a number of times since. To perform the exercise, the athlete starts out by kneeling on the ground with his or her feet secured with the help of a partner or coach.  Keeping the hips constant and in extension, the athlete lowers the body slowly against gravity towards the floor.   The hamstrings are contracting eccentrically to support the entire upper body as it is lowered.  When the athlete can no longer support the weight, they use the arms to push off of the floor and combine this momentum with the execution of a leg curl to return to the start position.

The NHE has been shown to increase eccentric strength more than other common resistance training exercises (Clark 2008).  Several studies have shown that it reduces the incidence of injury in soccer, rugby, and Australian Rules football players (Cowel et al 2012).  For example, Arnason et al. reported a 65% lower incidence of hamstring injuries between Icelandic and Norwegian soccer teams that participated in an intervention program using a NHE protocol (2007).

Despite a favorable turn up of evidence that the NHE may decrease the occurrence of hamstring strains in sports, there are some issues to consider.  The most glaring concern with this exercise is that it does a poor job of emulating the eccentric function of the hamstrings in sprinting, which is to decelerate the leg at the front side of the swing phase.  This is a function of eccentric capabilities of the hamstring with regards to movement at the hip joint, and not at the knee joint.  Because the hip is open and fixed during the NHE, the influence is on eccentric strength of the hamstrings during knee extension.

It is the opinion of the author that exercises that isolate the knee joint can be fine general preparatory exercises to develop general strengthening of the knee joint, however as specific exercises for sprinting (and in this case sprint related injuries), multi-joint exercises are far better.

Where does this leave us?

If the one exercise that has shown promise may not actually be the best exercise to use to prevent hamstring injuries, then what are the best exercises? To answer this question, a step back must be taken.  What do we know for certain?  We know that the injuries are occurring largely while the hamstrings are in eccentric contraction and during sprinting.  We know that the eccentric function of the hamstrings at the knee joint is not nearly as crucial as the ability of the hamstring to handle the large deceleration forces at the hip.  We know that conventional methods of resistance training are concentric in nature and do a disservice to the force production capabilities of eccentric contractions.  It is imperative that training considers these facts in the most specific ways possible.   Gambetta et al. asserts that hamstring injury prevention exercises should be multiple-joint, closed kinetic chain, and eccentric in nature (2006).

In the final installment of this series I will look at iso-inertial training, particularly using a flywheel, as a way to meet the multiple-joint, closed kinetic chain, and eccentric conditions of reducing hamstring injuries through training.