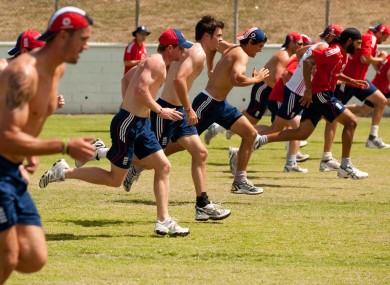 [This is a guest blog from Greg Gustin. Greg holds a Master’s degree in Health and Fitness from the University of Pittsburgh and is CSCS certified through the NSCA. Greg is participating in the coaching mentorship program at Athletic Lab.]

During a recent lecture from?Mike Young?on programming and exercise selection, he said??there are no wrong answers, but there are better or worse ones.? This statement holds true few places more so than in the realm of athletic performance enhancement. Energy system development for team-based field and court sport athletes is one such question with many possible answers. Maximal aerobic speed training is nothing new, but has gained popularity for developing the aerobic qualities of many field and court athletes. Tempo runs are a tried-and-true means that have long been used in track and field and applied to field and court athletes for developing aerobic qualities. As with anything else, however, application is dependent upon context. In the world of accessible information, coaches often see what the guy with the biggest name is doing and they are quick to implement it into their next block of training. A full understanding of science, purpose, and context are absolutely necessary before subjecting athletes to any and all performance enhancement protocols.

The What, How, and Why

Maximal Aerobic Speed ? Maximal aerobic speed (MAS) is scientifically defined as the minimal running speed at which VO2 max occurs. Field-testing has been validated for a maximal effort run at 1.5-2km for time. An athlete?s MAS is then calculated by dividing the distance by the time to yield a value in meters per second. Training in this manner generally involves intervals performed at or above MAS for a specified amount of time, accompanied by a 1:1 to 2:1 work to rest ratio. Common protocols are the 120% 15:15 Eurofit method and Tabata 20:10 method. Both scenarios employ short enough work intervals to allow speeds above 100% MAS followed by incomplete recoveries. The goal here is to improve aerobic power by increasing the speed and duration at which an athlete can remain aerobic over time. The research shows that the amount of time spent above 100% MAS is the critical intensity factor for improving aerobic power regardless of rest interval (1). In a sense, it doesn?t matter much what the work to rest ratio is, as long as the work is performed fast enough. Of course, reasonable recoveries of up to 1:1 allow for the accumulation of volume while maintaining such a speed. In a thorough review of MAS methods, Dan Baker notes that high intensity interval training using 120% of MAS is a very effective means of pushing the boundaries of the aerobic system (1).

Tempo?? Tempo runs are used in a variety of ways, with the most popular being extensive tempo and intensive tempo. Both are classified by training at a particular speed based on a maximal sprint effort of a given distance. Here, we will focus on extensive tempo, which typically ranges from 65-75% of maximal speed. For example, an athlete who runs an 11 second 100 meter dash would be allowed 14.5-17 seconds to complete a 100 meter tempo run. Distances covered are based on sport and position needs, with an upper limit of 200-300 meters per repetition for most field and court sport athletes. Rest intervals for tempo are generally 2:1 or greater to allow quality runs within an a-lactic environment as well as volume accumulation. The goal of extensive tempo is the development of the aerobic system without the presence of lactate or substantial central nervous system fatigue. In other words, it aims to improve aerobic capability at intensities that are high enough to retain speed qualities, but low enough to allow a quick recovery. The late Charlie Francis spoke frequently of extensive tempo in his book ?The Charlie Francis Training System? as a recovery aid as well as a tool for maintaining aerobic capability, leanness, and running rhythm (3).

Comparing methods for a given training focus 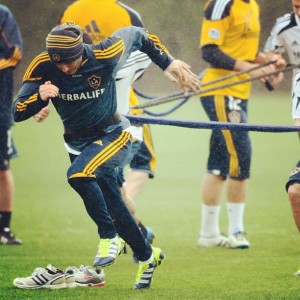 Speed Development ? Because MAS training is of high relative intensity due to incomplete recoveries, and low relative speeds due to calculation based on longer runs, extensive tempo may be the more effective tool during a speed development emphasis.? Tempo training is of low CNS demand and high rate of recovery post-workout, which allows for high-quality speed sessions to be performed concurrently. Tempo also does well, for an aerobic protocol, with approaching max velocity-like ground contact times and forces due to the speed of execution.

Example: Assume a field athlete who can run 5:30 in the 1500-meter and 11 seconds in the 100-meter (both pretty impressive for a field sport athlete).? The speed of execution for his 120% MAS training session is around 5.44 m/s, while his 75% tempo run would be at 6.82 m/s. Higher velocity = higher ground contact forces and shorter ground contact times.

Aerobic Power Development ? There seems to be more research supporting MAS training in this area. The effects are evident due to it?s ability to place high demand on the aerobic system as it trains the ability to recover quickly between bouts. A study following a 12-week MAS training program for high school athletes stressed that the amount of time at or above 100% MAS appeared to be the critical factor for improving aerobic power (2). It should be noted that while a set of tempo runs may stress the aerobic system to a lesser degree because of longer rest intervals, the speed of execution does meet and far exceed that critical 100% of MAS needed to improve aerobic power.

Maintenance ? I believe extensive tempo takes the cake here because it more closely approaches max velocity variables while stressing the aerobic system only to the degree that allows quick recovery for the next session. Volumes, then, can easily be manipulated to adjust for a shift in emphasis between maximum velocity, aerobic development, or in-season maintenance of either quality. 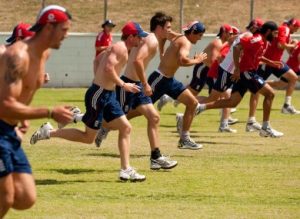 This is where it gets interesting. As was said earlier, application is completely dependent upon context. To review, tempo allows for more and better quality speed work because of quick recovery between sessions. MAS develops the ability to repeat successive submaximal speeds for as many bouts as possible. If MAS is to be kept a-lactic, few reps can be done at a time because of the incomplete rest. MAS develops aerobic qualities best when placing a high demand on the aerobic system, but then may need to replace some amount of speed work because of it?s higher intensity nature. In a high/low training model, tempo may conceivably develop the aerobic system at a slower rate, but remains a low-intensity stimulus. This allows for a higher high-intensity stimulus.

In field and court based sports, success is often determined by the athlete with the best speed and the greatest capacity to repeat that speed, as opposed to the athlete that can sustain sub-maximal speed for the longest. Charlie Francis uses the analogy ?A basketball player who cannot touch the rim is of little use no matter how many times he cannot touch the rim? (4). Tempo does not necessarily directly improve max velocity, but the forces and contact times approach those of max velocity, and the quick recoveries allow more quality speed work to be done. MAS protocols are used by coaches like Dan Baker early in a general preparation phase while intensities and volumes of speed and skill work are low to develop aerobic capability, then later in a specific preparation phase as a way to pre-fatigue an athlete for a skills practice to attain a game-like fatigued state (1). Many view tempo as an effective way to develop the aerobic system. Therefore, it can also be used early on in a GPP phase to do so, but does not work as well as a pre-fatigue protocol before skill work because it, by nature, should be able to be recovered from quickly. It may be best served as maintenance of the aerobic capacity and ground contact forces during phases of sprint-heavy emphasis in field and court sport athletes.

Overall, to be most effective, we need to look at the physiological demands of our respective sport. A sport that is heavily speed-power based with small aerobic components and little glycolytic demand may be best trained with a tempo/speed set-up. Conversely, a sport that requires speed, large aerobic capability, and some glycolytic demand may benefit from periods of MAS, followed by tempo/speed work. Nearly all field and court sports involve repeated sprint efforts and very few dip far into glycolysis. Therefore, consistently high emphasis on MAS training may not be necessary. This is because it develops the aerobic system very well by pushing back the need for glycolysis, but does less to support the development of speed qualities. If the method is scientifically understood and the physiological needs of sport are accounted for, both MAS and extensive tempo are quite effective protocols. It is ultimately up to the coach to keep context in mind and use the right one at the right time.