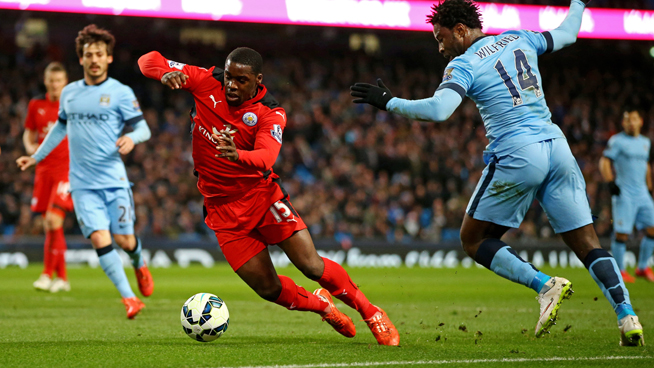 Change of direction ability ? Are we missing the point? by Ivan Jukic

[Ivan Jukic is finishing his Master’s degree at the University of Zagreb, Croatia where he also works as a personal trainer and S&C coach for soccer. He is currently an?Applied Sport Science Intern at Athletic Lab.]

From?my last blog post, we could establish the difference between agility and change of direction. I would highly recommend reading it first to let everyone be on the same page here.

Okay, now when we know that these two skills are isolated, what about COD? What can we do wrong here?

Change of direction (COD) ability is an important physical fitness capacity required in conjunction with cognitive- perceptual ability to perform effective and efficient agility maneuvers in many sports (Sheppard & Young, 2006). Change of direction (COD) speed forms the physical foundation for agility, as it incorporates the mechanics associated with agility performance (i.e., the deceleration, directional change, and acceleration) (Sheppard & Young, 2006). Because of the importance of using COD movements to build the physical platform before performing agility, many strength and conditioning coaches seek to use appropriate tests to accurately isolate and measure the physical quality of changing direction, however, are they really isolating change of direction ability?

Although, the physical capacity to change direction is often measured by strength and conditioning professionals, the ability of these common COD tests (presented as time to complete a running task) to truly measure one?s ability to decelerate and subsequently reaccelerate in a new direction is often tangled within one?s ability to perform straight line running. However, because everyone is using them, it doesn?t mean that they are good or without limitations. Many of them have been used for different sports where that particular change of direction movement, never happens i.e. it?s not specific to the given sport.

Besides that, few of them last too long, which reduces the emphasis on COD ability and places the focus on anaerobic capacity and linear sprint ability. The T-test can last up to 10-12 seconds (Lockie et. al, 2014; Pauole et. al, 2000, Sassi et. al, 2009), whereas the IAT can last almost 20 seconds (Jarvis et. al, 2009; Lockie et. al, 2013; Vescovi & McGuigan, 2008; Wilkinson, Leedale-Brown & Winter, 2009) in athletic populations. As COD is fast and explosive ability in nature, we can question the reliability of the 20 second long COD test.
The challenge in assessing COD ability is isolating that physical quality in a simple metric for strength and conditioning coaches.

It is possible that in many COD tests, an athlete?s ability to actually change direction may be ?masked? by other physical qualities needed within the test (e.g., linear sprinting ability, anaerobic capacity, and movement specificity for the test) (Nimphius et. al, 2013; Sayers, 2015; Vescovi & McGuigan, 2008). As a result, it would be pertinent for strength and conditioning coaches to be able to use an assessment that more clearly identifies COD ability.

One of the tests that restrict many of before mentioned limitations is the 505 test. The 505 traditionally involves a 10-m sprint past a timing gate, a further 5-m sprint to a turning line where 1 leg needs to reach and plant at this line before the athlete completes a 180 turn and sprints back through the timing gate. The test can be also used to investigate COD ability for each leg, which is very important for athletes because they need a balance between the legs in power-based activities (Duffield & Drinkwater, 2008).

Nimphius et al. (2013) originally stated that because of the design of the 505 test, approximately 31% of the time is spent actually changing direction. Therefore, a majority of the total time to complete the test can be explained by an athlete?s acceleration ability. We can think about this as testing their linear sprint speed again. This concept is supported by research that has found large correlations between linear and COD speed tests (Gabbett et. al, 2008;, Lockie et. al, 2013; Pauole et. al, 2000; Sayers, 2015; Vescovi & McGuigan, 2008), although it is widely acknowledged that they are different skills (Salaj & Markovic, 2011; Vescovi & McGuigan, 2008, Young et. al, 2001).

One practical solution to this problem is the COD deficit that is a procedure proposed by Nimphius et al. (2013). The COD deficit documents the effect or additional time that one directional change requires when compared with a pure linear sprint over an equivalent distance. The same author tested Division IA collegiate football players whereby COD deficit was calculated as the difference between the 10-yard split time during the 40-yard sprint, and the 10-yard split with 180 cut that was measured within the first half of the pro-agility shuttle. When COD deficit and modified pro-agility test times (first 10-yard split and total time) were assessed through a partial correlation with sprint time over 10 yards as the controlled variable, the explained variance was very high (89%).

More recently, Nimphius et, al. (2016) assessed COD deficit in Cricket players during the 505 in comparison with one?s 10-m sprint time, to determine whether it provided a more specific measure of COD ability. They observed very large relationships between the 505 and COD deficit for both legs but not between COD deficit for both legs and linear speed. It is important to note that the COD deficit is a measure that provides information on COD ability relative to one?s speed sprint speed instead of being inclusive of one?s sprint speed as would be the case for the total time. If an athlete improves their linear speed but does not improve their COD ability, the total 505 time may decline (perceived COD improvement), whereas the COD deficit would either remain the same or potentially become worse if they cannot handle their new speed capacity when entering a COD.

One of the things that S&C coaches should look at is qualitative data of change of direction ability. Having quantitative data i.e. total time of the particular COD test is great but there are some problems with it. If we have an athlete that has super COD ability on both legs, but we only know that from quantitative data, we could miss one important piece of the puzzle. The thing is that athletes know how to cheat. Be sure that they are going to do that while trying to get the maximum from themselves. For example, an athlete can have a great COD test time on the preferred leg with almost no difference related to non-preferred leg. If we look at the numbers, everything is fine, and in most cases, we just want our athletes to get the job done. However, maybe they are using their preferred leg more on both sides which means that we are testing their ?better? side twice. This can be ok but the problem comes out when an athlete doesn?t have time to use his ?better? leg, usually in sport-competition settings because it?s not biomechanically efficient and can lead to overuse injuries. Technical differences provide vast information about ?how? the athlete attain their quantitative performance measures. Therefore, despite the ?what? or time of the performance, the ?how? or quality of the COD could provide valuable information to the coaches for understanding windows of adaptation for their athlete. This means that test should focus more on what happens during the COD, as opposed to the total duration of a test that may predominantly evaluate linear speed capacity.

The COD deficit and COD test total time seem to provide different assessments of the physical capacity of COD ability. Strength and conditioning coaches who use the COD tests should also calculate the COD deficit to provide a potentially more specific measure of COD ability. Because many coaches will also measure 10-m sprint performance in their assessments in linear speed, it should not take too much extra effort to calculate the COD deficit for a squad of athletes, especially if this can elucidate useful information. Coaches who do not use the 505 test, for example, should consider adding this assessment to their protocols so that they could use the COD deficit, as it seems to better isolate the ability to change direction. We should wait for more studies on evaluation of the COD deficit in other COD tests to get a clearer picture about this practical yet very valuable application (on such study is currently being conducted at Athletic Lab Sports Performance Center in Cary, NC). Additionally, we don?t have to dump all the data that we got from years of testing the COD ability from various tests, we should just aim for being more accurate with applying this, it seems, very practical and useful extension to our usual assessing protocols. The misidentification or incorrect assessment of a physical quality such as COD ability could eventually result in a practitioner developing a training program that either fails to improve on an area of need or potentially focuses on an area that has a limited window for adaptation. Finally, a combined consideration of outcome and process (?what was the time? and ?how was it obtained?) will ultimately provide the most comprehensive applied assessment of COD performance.