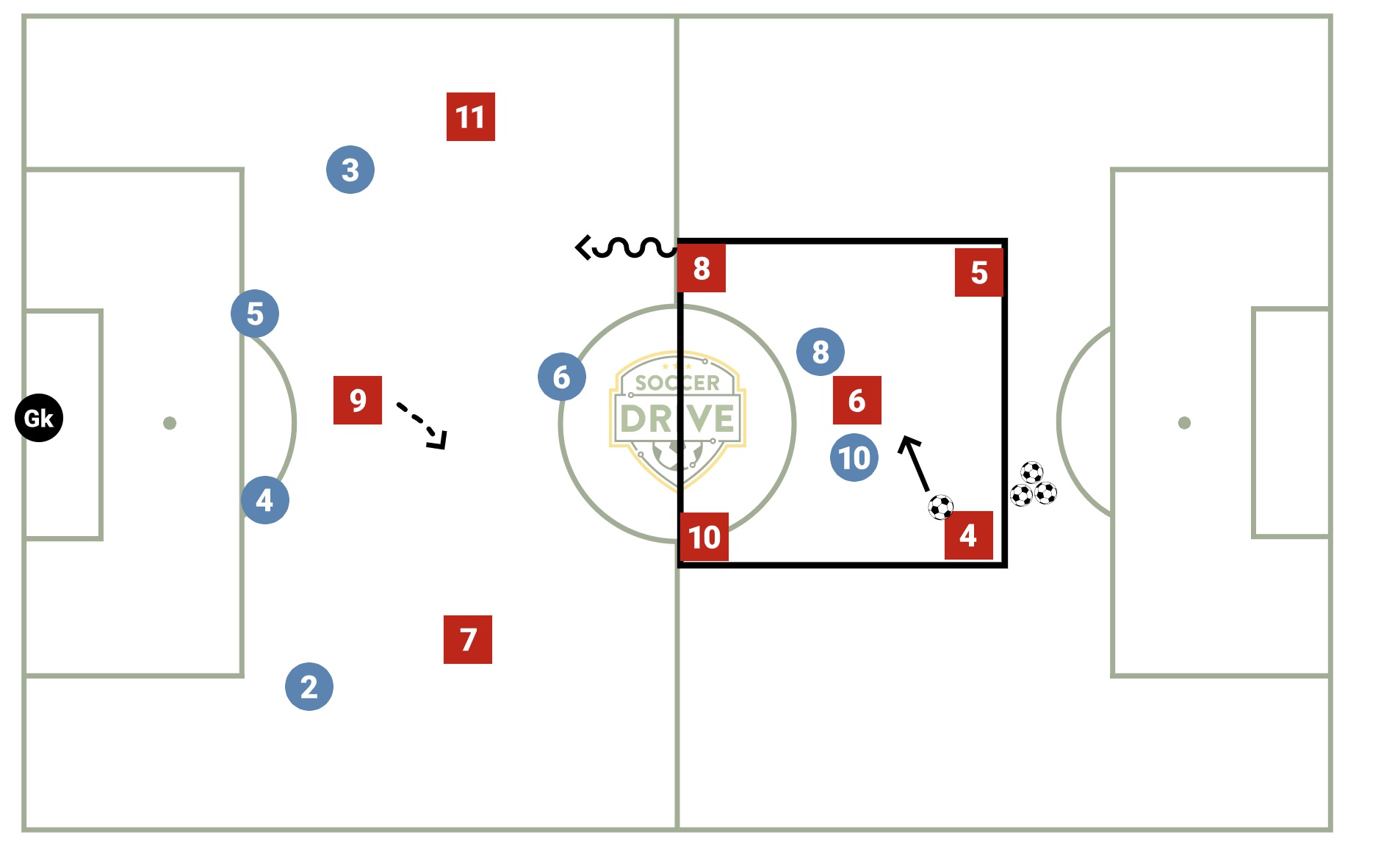 [This is a guest blog by Kacie Mollin. Kacie is a senior at UNC Chapel Hill majoring in Exercise and Sport Science and minoring in Spanish. She has a passion for soccer and hopes to advance her career in both fitness and coaching. She is currently participating in the Athletic Lab Internship Program. ]

Football is a physically demanding sport at all levels, that requires a range of athletic capabilities. All players must be well trained in speed, agility, strength and endurance to perform well in the sport, some of which comes from inherent athletic ability, and some of which comes from training. The game of football requires immense aerobic endurance for the length of a 90-minute period. Yet, despite this fact, anaerobic pathways are equally, if not more important to the game, as they are most often utilized in goal scoring opportunities. In other words, anaerobic conditioning is critical to developing goal scoring and successful teams. Interestingly, in contrast to other sports such as volleyball and basketball that require relatively consistent physical demands in each position, football demands very specific adaptations in each position. Not only this, but specific formations can further alter these adaptation requirements. Studies have shown the different distances and types of running are required from each position during a game based on GPS tracking data.

Not only this, but studies have demonstrated specificity of technical and tactical skills exhibited and necessary by players in each position. While a foundation of basic skills is necessary for all positions, it can be argued that different positions should train different skills in varying amounts to ensure better game time performance. Developing these specific motor skills by position will happen somewhat naturally from gameplay, but can be enhanced with intentional drills during practice.

Overall, there are many techniques and tools that can be used to inform training and conditioning sessions in football athletes. GPS data can be extremely helpful in informing training and conditioning programs for specific positions and even specific players, especially during the inseason. It can also be helpful in addressing individual player inadequacies during games and training, and aid in determining supplemental conditioning or training that specific players should do to keep up with their teammates. Additionally, it is in the best interest of coaches to keep playing level high during the competitive season, and maximize time working on skills and perfecting strategies rather than spending significant portions of practices doing fitness. This can be achieved and monitored through integrated position specific conditioning with surveillance from GPS devices to assure that athletes are meeting the proper stimulus thresholds during practice.

In this blog I will consider the importance of position specific conditioning and training for in season football players based on GPS data and quantitative research. I will consider the methods of which GPS data and research supported practice formats can be used by optimizing practice time to allow for position specific technical, tactical and physical training. Additionally, specific drills will be provided in application of said objectives.

Although all positions in soccer require aerobic endurance capacity, different positions require the athlete to run varying overall distances and amounts of high velocity sprinting. A study investigating these differences in physical demands between players used GPS data to track European Premier League players through 44 competitive matches. The GPS technology was used to track distances run through the course of the games as well as time spent running at certain speeds and acceleration intensities. The researchers broke down these different speed elements into categories including, high intensity acceleration, mid intensity acceleration, as well as very high-speed running and sprinting. Each of these values was determined based on the relative speed of each player and were grouped by position and then compared.

How can GPS be used knowing this information?

These metrics can be used to inform conditioning design for specific positions and specific players, especially if GPS can be utilized in practice in order to make sure all players are reaching the training stimulus threshold. For example, if a midfielder is running less than a center back, this could indicate significant fitness and/or effort deficits during practice. It could also help address positional concerns, such as confirming lack of movement off the ball or inadequate tracking back. It can also be used to test the efficacy of certain drills on their intended training outcome. The many uses of this technology in tracking training, progress, and informing training decisions could increase overall team fitness and optimize training results and game application.

According to this study, center backs were required to perform more long passes after a high intensity effort play, referring potentially to balls cleared out of the back following offensive attacks or more calculated long balls. Center backs were also often required to track and cover the opposition defensively as they are the last line of defense often facing the opposition.

Central forwards had the least amount of tackles recorded following high efforts. Central forwards, however, had the highest intensity runs in the final third of the field, with most of their runs being off the ball, when compared to that of central and wide midfielders who ran with the ball far more often.

While seeming somewhat obvious to experienced soccer players, knowing this information from a scientific basis can be extremely beneficial in designing team and individual sessions for both high level and amateur level soccer players.

A common issue with position specific conditioning and technical training is team and time management, and general convenience. Lack of coaching staff to split players into groups, lack of field space, lack of equipment, restricted training times, and in-season schedule demands are all examples of potential challenges to in-practice position-specific training.

In terms of tactical training, large sided games are one of the best ways to develop specific skills. It involves more long range passing and complex movement patterns most represented in competitive games. GPS can be used here to analyze if players practicing at game-like speeds and compare distances run my players in the same position. If players don’t reach certain metrics or goals, conditioning drills can be added to accurately mimic a game.

On the other hand, short sided games allow for a combination of technical training and conditioning, as they generally elicit higher HR responses and more ball contact. Conversely, larger sided games allow for longer distances to be covered and longer, high intensity runs. In general, both methods should be combined.

Additionally, game realistic drills can be used and designed in ways that enable conditioning during tactical training. The following are examples of ways to maximize practice time with position specific tactical, technical, and conditioning drills. 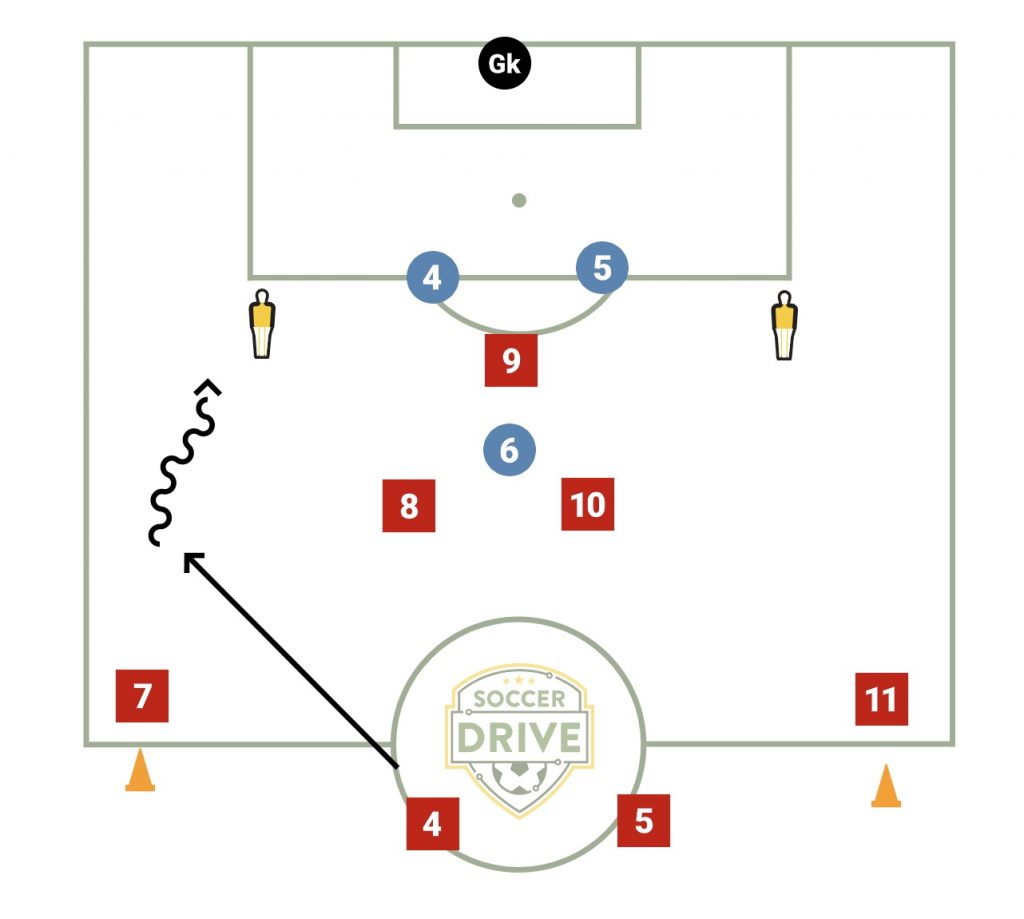 The drill above focuses on a wing midfielder’s (7,11) and wide defender’s (2,3) high velocity running followed by skill work and decision making. The 4 or the 5 will start the drill by playing a ball in front of the 7 or 11 (which can be switched out with 2’s and 3’s) who will then dribble at full speed at the mannequin target. They then must decide to complete a skill and take the ball outside for a cross, or complete a skill and play with their 9, 8, 10 through the middle. Numbers are intentionally up on offense to allow for advantage and increased touches on the ball. This drill also functions to work on the 9’s runs off the ball, which are emphasized in the studies mentioned as being a major part of these movements. Additionally, the 4 and the 5 are under significant pressure to apply high pressure in their final third and to clear the ball out, which was noted as a common tactical theme for center defenders. Players should stay in for 3-5 plays to achieve an aerobic stimulus, then be switched out. 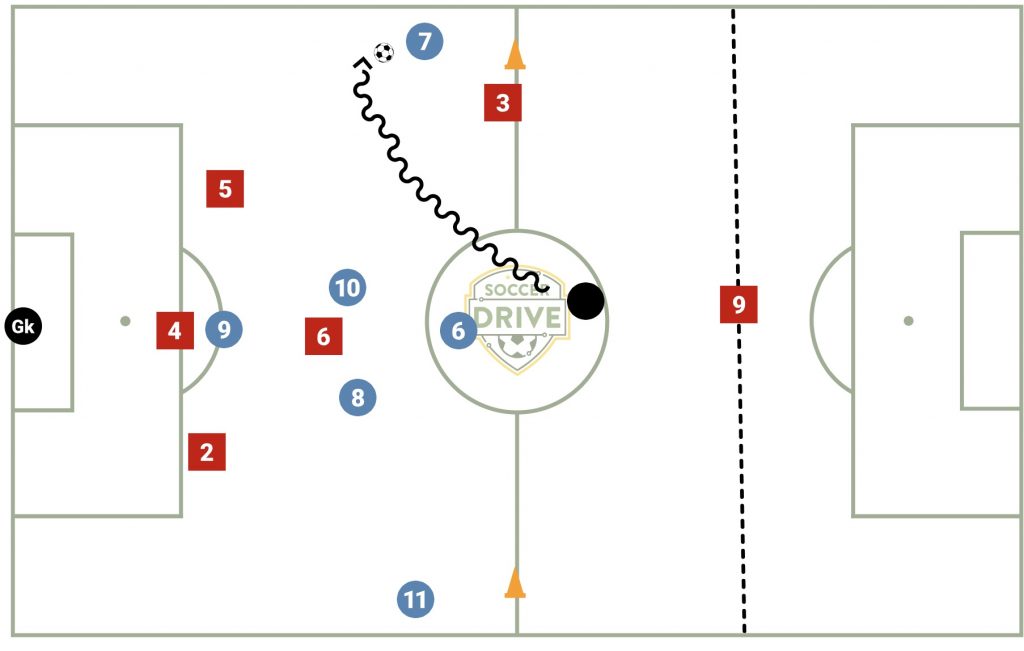 The drill above works on high intensity offensive attack and recovering defensive shape simultaneously. The 7 or 11 (2’s and 3’s can also rotate through here) is served from a player/coach who is out of play with a ball that is into space. The 7 has a couple steps advantage on the opposing wide back. Both players on this side are exerting maximal effort to win the ball. The 7 is expected to win the ball, and then free play begins. The objective of the blue team is to score while the objective of the red team is to clear the ball to their 9 as a target. They can clear the ball in any way necessary but would ideally hit the 9s feet. This drill allows for maximum intent runs on the wings from both the wingers and wide backs, as well as freedom in the attack to allow for the 9 to make full effort runs off the ball. It additionally allows the center backs to work on clearing following high intensity plays. While the wing attacking players and defenders can be switched out every 2-4 plays, the midfield should remain relatively consistent, to allow for an aerobic endurance threshold to be met. Each play should take no more than 2 minutes, keeping in mind that the most intense runs should be less than 10 seconds, and the next play should follow immediately. 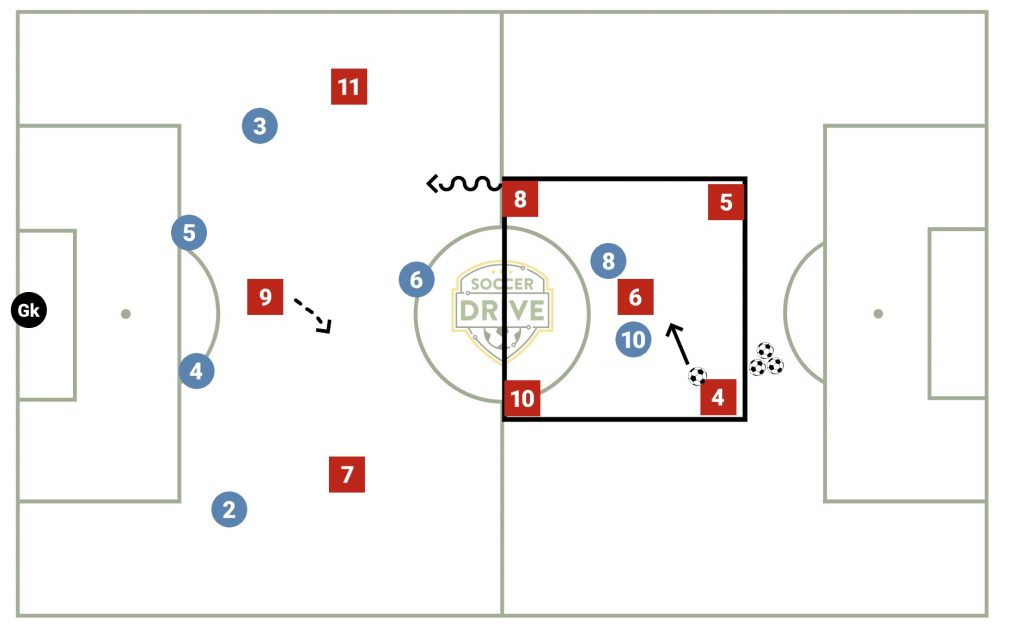 This drill focuses a bit more heavily on the midfield. It uses almost the entire field to allow for long distances to be run by the players. The five red players in the box include the midfield and the center backs. They will play one touch 5v2 before completing 7 consecutive passes, in which the 6, 8, and 10 will leave the box and start the attack. The 4 and the 5 on the red team are involved in the play until the ball reaches the halfway line. The 8 and 10 on the blue team are expected to work back on defense as well. The goal is to score, and any dead ball will restart the play. The 9 on the red team is expected to check the ball or make runs through the defense, but can be creative. The goal of this drill is to work the midfield hard, aiding with their change of direction, quick touches on the ball, and long distances run up and down the field with repeated plays.

Overall, with all this GPS data on the physical demands of each position allow practices to be more informed than ever before. For in season players, intentionality with drill selection is immensely important as there is limited time to allow for designated conditioning. That being said, with research pointing to the most important movement patterns and skills of each position and the GPS technology that allows us to track our players movements and work ethics on and off the competitive field, practices can be more efficient than ever before, and progress and deficiencies in individual or team play can be more easily addressed.